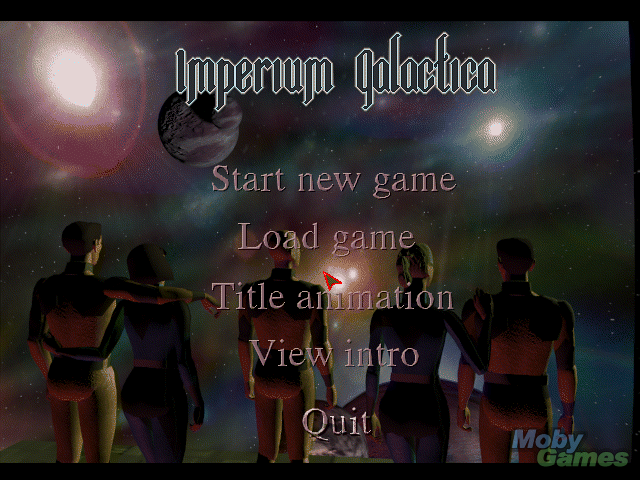 Imperium Galactica is set sometime during the fourth millennium and you, as a human, must rebuild the Human Empire. You start out as a young lieutenant and are given a series of missions to complete. You then advance to the next rank and are given more ships to control and more available commands, but you have more area of the universe to police and more colonies. This continues until you reach the rank of Grand Admiral, where you are able to view the whole map.

When you are in command of a region, you must worry about its economy. Ensure that taxes are collected and that the people are well-fed and reproducing. 75 new scientific discoveries can be made over the course of the game.

Your enemies are a bunch of alien races. They each have their own style of architecture, ships, and land-based units. However, some are more inspired than others. Diplomacy options ensure that all-out war is not the only way to victory. In combat you have ships to protect and mercenary pirates to deal with.

There is a plot-driven interactive movie element to the game, with an opening movie, and cutscenes appearing whenever you advance in rank and also at certain other points in the game. Voices used in these are computer generated.

The player has to refit every single ship manually. The land battles resemble Command & Conquer , though with only vehicle units.

Reviewer: GregoriusMagnus - - November 6, 2019
Subject: Anybody able to launch?
Anybody managed to launch the game already? I was going to get on my knees for whomever uploading this, but then it turned out to be not working. Even CD switching command was unable to help here.